Canadians on the Downham Estate

The year was 1917, when the small village of Santon Downham was introduced to the 126th Canadian Forestry Corps, it was a small party of officers & men doing a survey of the trees on the estate with a view to extracting any suitable trees putting them through a saw mill & using the processed timber for the war effort. It was also necessary to find a site for the mill & to find a route for a light gauge railway system to bring the felled trees to it with a standard gauge siding connection to the Great Eastern main line. 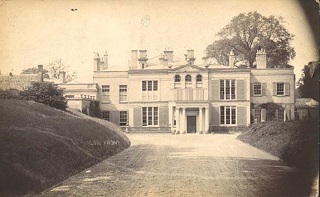 Once all this had been established, more Officers NCO's & men gradually moved to the village from Ampthill in Bedfordshire were they had been carrying out the same operation on the Ampthill Estate, by this time the Hall at Downham had been requisitioned from the Mackenzie family who had previously run the estate mainly as a shooting estate for pheasant & game. Edward Mackenzie was a Scottish banker & railway entrepreneur who had worked with his brother William, John Stephenson, & Thomas Telford, all engineers in their own fields to build the first canals & railways in England Scotland & France.

On retiring Edward bought Fawley Court in Buckinghamshire then extending his property portfolio by buying Downham Hall in 1883 as his shooting estate, on his death this then passed onto his son William Dalziel Mackenzie who made improvements to the Hall, Estate & buying a further property known as Croxton Park near Thetford. As time went by the Canadians settled into the hall & made various alterations to suit their requirements, one was to install electricity & facilities for the men's entertainment this became the Y M C A club which at a later date moved into a purpose built timber hut & had its own performing artistic group known as the Woodpeckers.

Every man was expected to pay a subscription for his entertainment & drinks bill, as a result in having this facility local families were invited to come to some of the evening events. During the course of this one particular family reciprocated by inviting some of the young men to come to their house for suppers, Mrs Carter was a good motherly cook so these meals went down very well with the young men who were far from their homes, pleasant conversations sing songs also went down well. Eventually one of these young men became attracted to one of the daughters Janetta & she to him this was carried out under the watchful eyes of Mr Carter, eventually William Lenny proposed but before a wedding could take place William decided once he was demobbed from the Army he would stay here in England & would set up in partnership with a friend & start a photographic business in London, if things went well financially he would invite Janetta to join him. Times were hard after the war so Read & Lenny could not make a go of it William on moving back to Downham married Janetta in February 1920 at St Mary's Church with the entire Carter members present.

A guard of honour was formed after the ceremony outside the Church by members of the estate being Gamekeepers warreners & hall staff. The happy couple settled down in the village with William finding work as a freelance commercial artist with some work coming from people he had dealings with in London. He also became involved with the construction of two Canadian log style houses which were built on land occupied by trees at the top of Thetford Road Brandon adjacent to the Santon Downham turn off, these became the homes of Mr & Mrs Woods to be known as the Chalet latter occupied by the Thorpe family Mr Thorpe being a market gardener on the site. The Second home was slightly bigger with a Small cottage at the back of the site for staff a Captain Joseph Ackroyd Whitaker first purchased this house; he was the son of Richard Whitaker who started the Cock of the North Brewery in Halifax West Yorkshire. Joseph as a young man joined the 1st Battalion of The Duke of Wellingtons West Ridding Regiment in 1900 & went out to South Africa during the Boer War transferring to the 1st Battalion of the regulars seeing action in all the major battles rising through the ranks to be discharge in 1906. He then joined his father's business as a director & in 1911 I think he was introduced to Suffolk by a friend, he eventually moved to Santon Downham & then bought the house built by Major Kenny's Downham Syndicate & Construction Company on the Thetford Road in Brandon known as Kenilworth. He became church warden to St Mary's church in Downham & when he died in 1952 his wife Alethea bequeathed money to the church for the installation of electric lighting. In the church there is an oak plaque bearing these details. 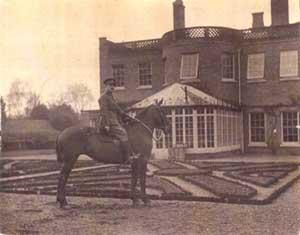 Mr Basil Rought - Rought & his wife then bought the property & when they moved in renamed it Viking Lodge, Mr Rought being one of three brothers of whom took over the running of the family business of their fathers W Rought- Rought Haters Furriers based in George Street Brandon with a smaller factory in the north of England, these were businesses taking in rabbit skins from home sources & abroad. The skins would be cleaned graded & dried the fur then being stripped off & sent to manufactures of felt hats in Luton. 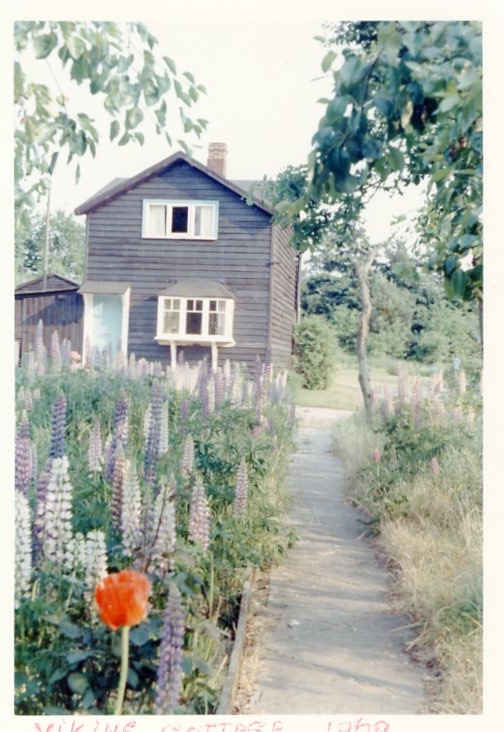 Janetta now Mrs Lenny & William also became involved with the local amateur dramatic society known as the Brighter Brandon Company with Janetta looking after the wardrobe & making some of the costumes, William using his artistic skills to design & make the stage sets. Flo Jannetta's sister married another of the Forest Corps by the name of Frank Hawkins & settled down locally.

After the war had finished the 126th Canadian Forestry Corps were disbanded some of the boys returned to their home towns in Canada & the USA others volunteered to stay on as did William Lenny & of course Major Kenny the commanding officer who established the Downham Syndicate & Construction Company, under his Directorship the operation was acquired from the Board of Trade. The 126th Corps was considered to be one of the best operations set up by the Canadian Forestry Forces during their time during the war, before the war he was an employee of J R Booth a lumber tycoon who controlled some of the largest timber rights in Central Ontario Canada & operated the largest mill in the world on Chaudiere Island in the middle of the Ottawa river in Ottawa with its own docks for shipping processed timber to many countries around the world, he also built the Canadian Atlantic Railway & was known as one of the fathers of Canada helping to establish the new capital of Ottawa, so all excellent experience for Major Kenny.

At Downham Hall a total of 1400 cubic feet of timber was harvested & converted into 200,000 lengths suitable for the making of material for war use. The total labour involved was approximately 180 officers & men of the 126th Corps & included 250 German prisoners of war of who were billeted in a purpose built camp on the site of the present community hall, all using two Canadian mills to machine everything up, one of these mills was on the site where the Creosote Plant used to be adjacent to the Great Eastern Railway line, now of course a part of British Rail Network , a siding was installed from this to allow for supplies to come in & timber to be dispatched out.

The operation had utilise the iron bridge across the Little Ouse river to enable its own narrow gauge railway to run from the siding for seven miles through the estate to High Lodge & a branch to Little Lodge Farm which utilized 3 No Bagnall 0-4-0 ST steam engines that ran on a 3ft gauge track, these hauled timber bolster wagons from the loading places along its route, a number of heavy draught horses were employed to haul the logs from the felling areas to these points & to haul wagons on other duties, other transport included 1 motor lorry & one car.

The construction side of this new business built 4 houses in total in Brandon as show houses two of which are mentioned at the beginning of this story the others may have been at Rattlers road & London road the thinking behind this was that it would take off & the company could expand utilizing timber from other estates but unfortunately it did not mainly because of the style of houses so eventually the company wound up & everything was sold off.

Although the Downham Syndicate had the timber rights after the war the estate passed into the hands of a series of land speculators after the government put the land up for sale, but was then bought back in & it became under the control of the Forestry Commission, now Forestry England, so this year 2019 the Commission will have reached its Centenary as it was formed in 1919.

My interest in this history all began when I was a school boy as I had the opportunity to work for Mr Basil Rought - Rought for two years before I left school, mornings & evenings looking after the chickens boilers in the house & cutting the grass Saturday mornings in the summer & other jobs in the winter, also joining Friends of Thetford Forest which lead onto the Heritage Lottery Funded project about the History of Santon Downham & High Lodge covering the Canadians 126th Forestry Corps & Railway system they installed.

During the time that I spent at the various workshops that were sponsored by the Heritage Lottery Fund one such workshop covered the Downham Estate & we all received an archival record document No RG12/2010 by the Forestry Commission & within I noted in 1891 a Richard Dickerson aged 67 a Warrener had one Alfred Adams aged 19 living with him in his cottage & he is also down as a Warrener, from my searches into my paternal ancestors I think I can safely say that he was my grandfather, this was during the time that the Mackenzie's owned the estate & I think that Alfred's daughter Louie also worked at the Hall before she emigrated to America. In later years my mother also worked on the estate in about 1939 at this time a lot of the trees had been planted by the Forestry Commission & had become established as I was told she did some brashing work, Bob Levett was the Ganger at High Lodge & I believe he did this until he retired so he must have seen the filming of Dads Army. 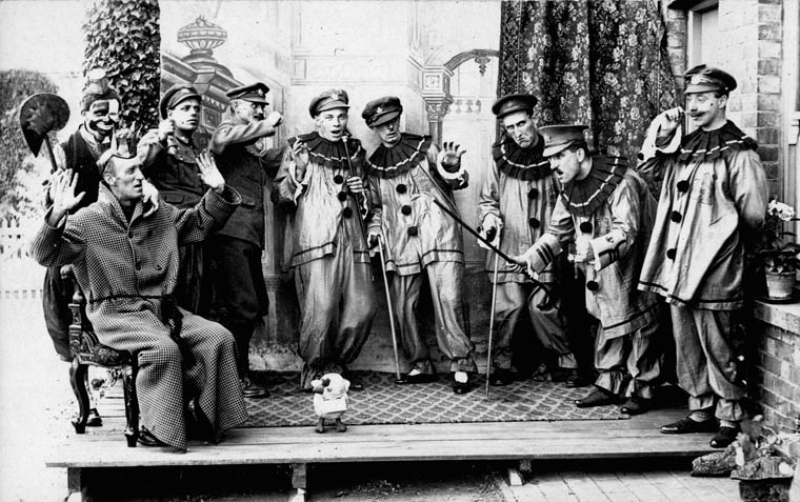 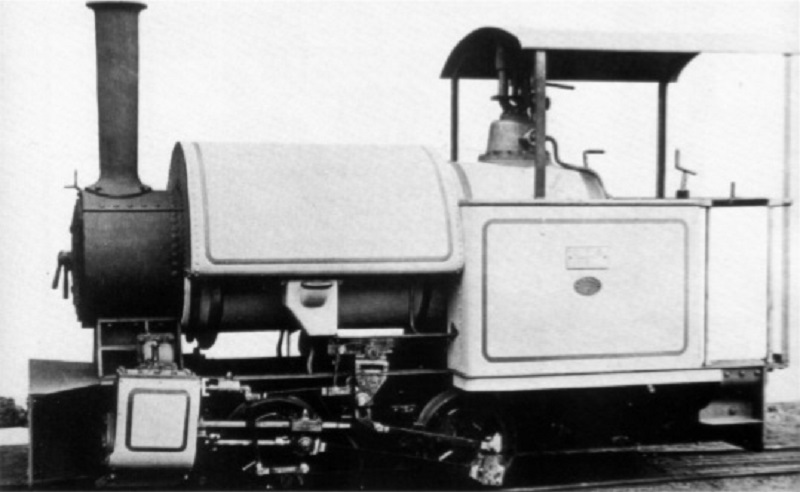 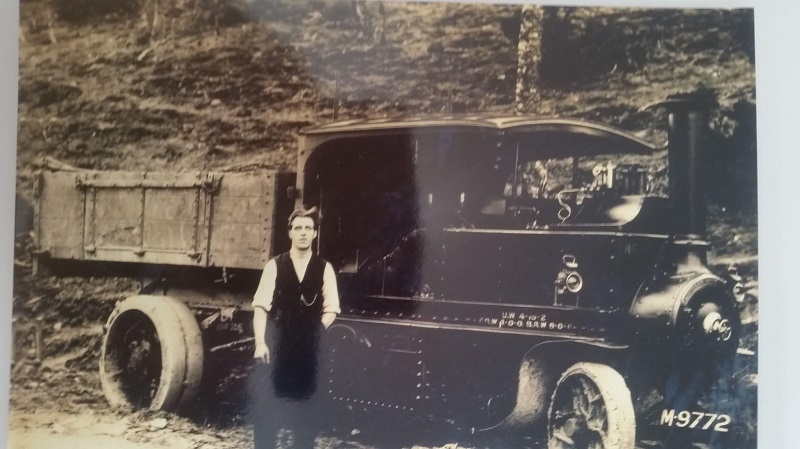 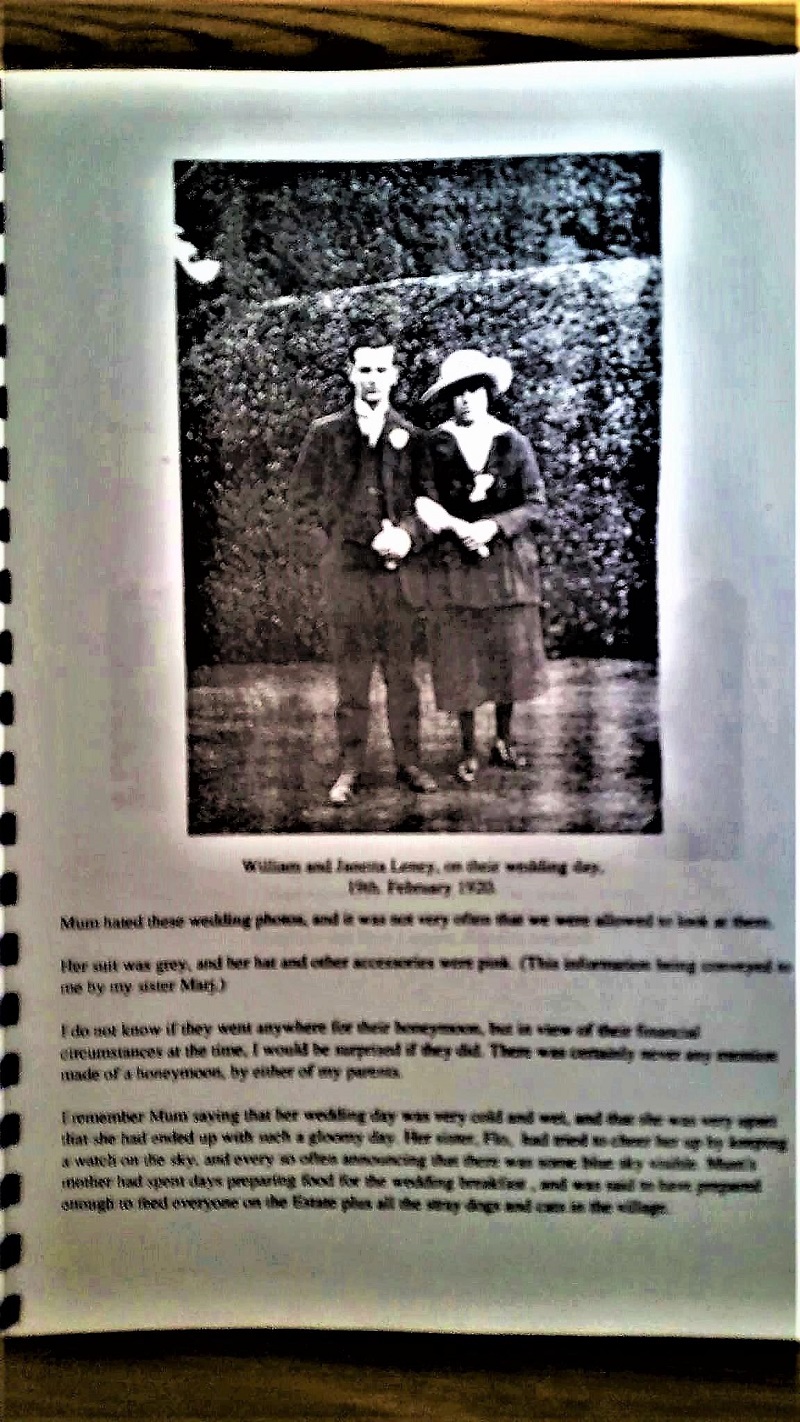 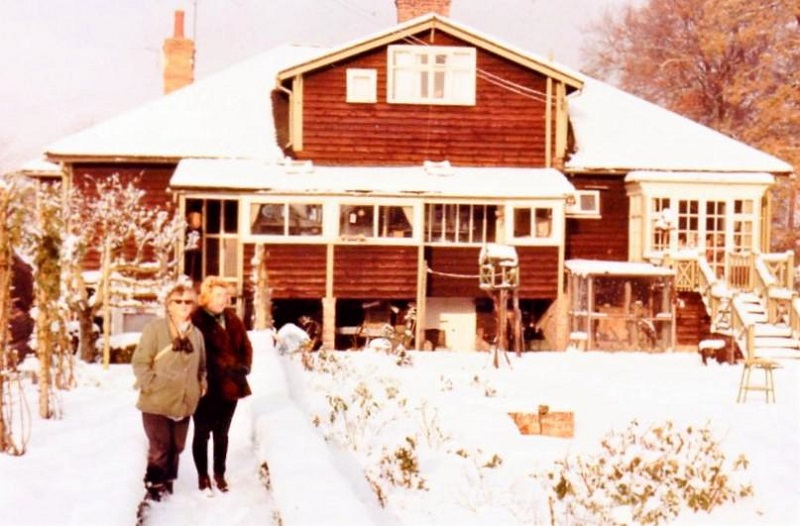 The house Major Kenny's Company built for Captain Whitaker. The pictures shows Mrs Pamela Rought - Rought with her niece in 1963 the rear view, a drive came in to the front of the house through double gates from the Thetford Road with a circular turning of large proportions when the Whitakers lived here but Mr Rought closed the entrance & used a track along the Brandon town side to enter the large property. 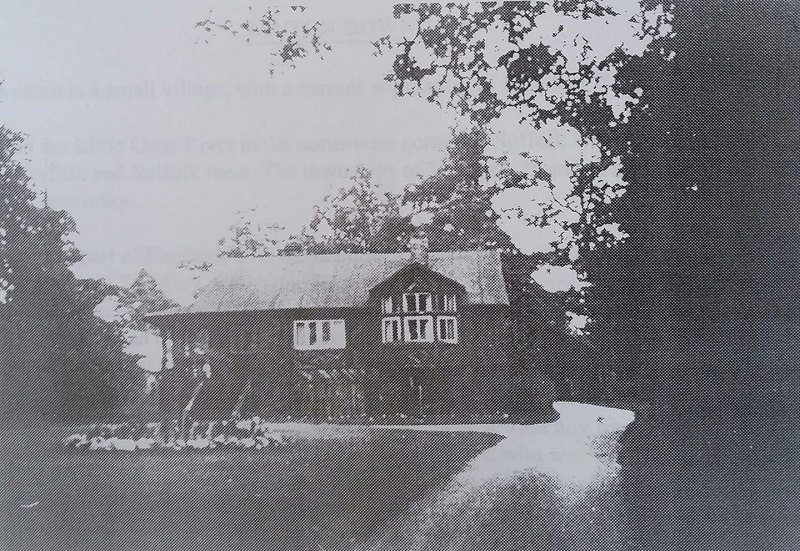 One of the other houses built by the Downham Syndicate & Construction Company, first occupied by the Woods then in the 50's by the Thorpes known as the Chalet. 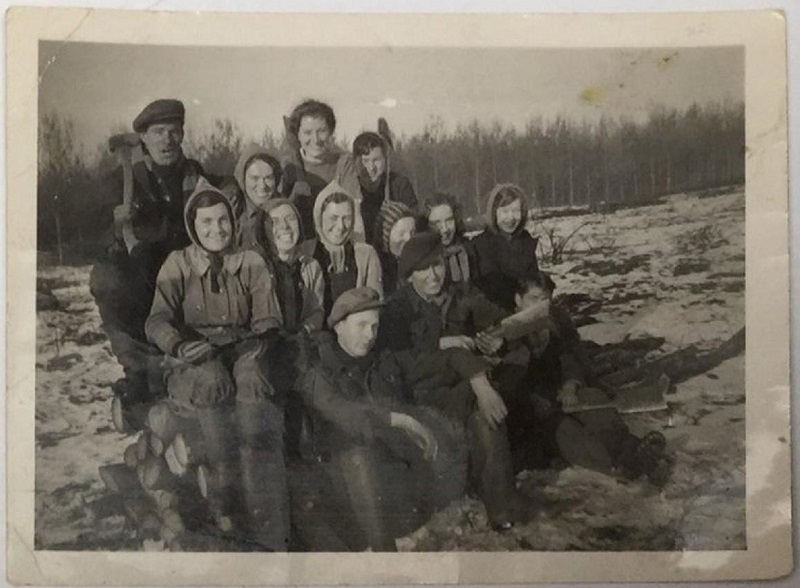 Top row: 1st Lt Bob Levitt, my Mums friend Lil later to become Bobs wife, my Mums Peggy Adams. Middle Row 1st on Lt Joyce Beckham, all the others are as yet not identified. Picture taken about 1939-40. 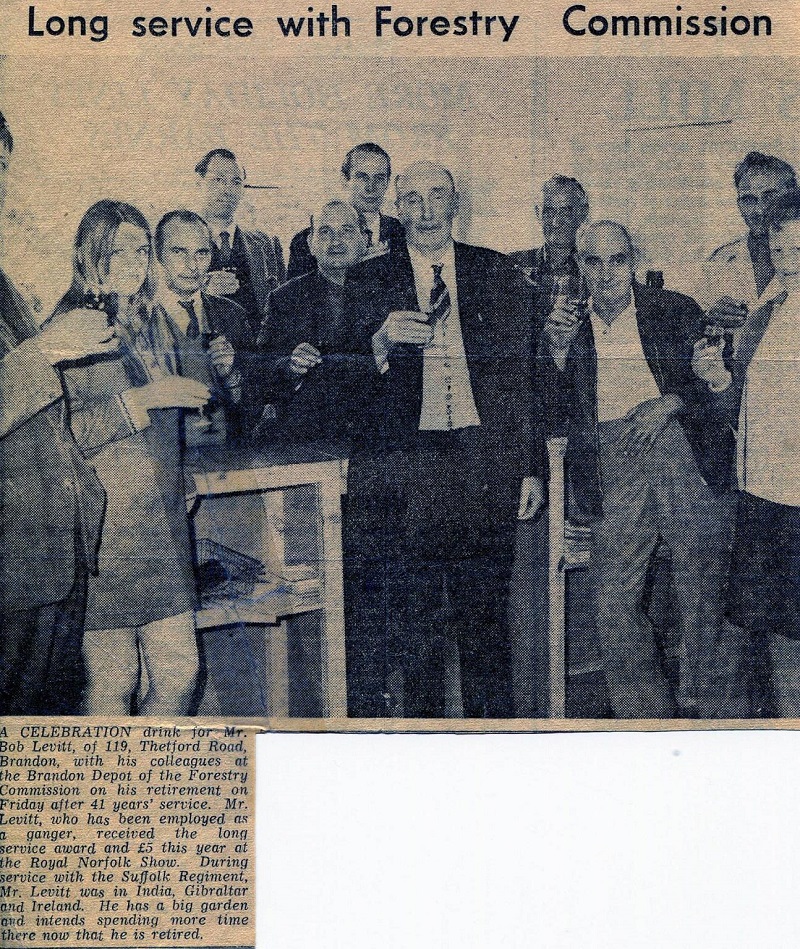 Bob Levett, centre of picture, he was Ganger at High Lodge when he retired.